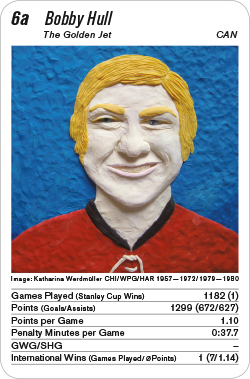 Legends Trumps Game consists of 40 cards. Before the game starts, the players decide if the highest or lowest value wins. All the cards are shuffled and dealt. Any number of people can play. The players hold their pile of cards in their hands so that they can see their top card only. A player starts by choosing a category and reading out its value. Each player then reads out the value of the same category. The player with the highest resp. lowest value wins all the top cards, collects them and moves them to the bottom of their pile. That player then chooses a category from the next card. The winner is the person with the most cards. There are two ways to finish the game: The game ends when a player runs out of cards. In this case, the player with the most cards wins. Or, the game ends when a player has collected all the cards.

The pack of cards can also be used to play the classic way, known as Quartets. The pack includes ten sets of four cards. One set consists of, e.g. the cards 1a, 1b, 1c, 1d. A person asks another player for a specific card needed to complete a set. If the player has the card, it must be handed over. The person continues to ask for missing cards until the answer is negative. The turn now passes to the player who was asked last. As soon as a player has collected all four cards of a set, it is discarded and placed in front of the player. The winner is the person with the most sets.