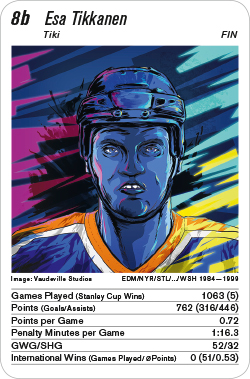 Includes all National Hockey League (NHL) games during the regular season and the playoffs in which a player set foot on the ice or received a penalty. In brackets, the number of Stanley Cup wins the player won with his team.

Total points equals the total number of goals plus assists of a player during his career at the National Hockey League (NHL) in the regular season and the playoffs. An assist is a pass, or deflection of the puck which enables the teammate to score a goal. Each assist and each goal count one point in the player’s statistical record.

The average number of points per game. The calculation is based on the games and points of the regular season and playoffs during a player’s career at the National Hockey League.

enalty Minutes per Game is the number of minutes on average a player spends in the penalty box per game. The calculation is based on the games and penalty minutes of the regular season and playoffs.

GWG (game-winning goal) is the goal which puts the winning team one goal ahead of its opponent. For example, if a team wins 6:2, the third goal of this team is the game-winning goal. SHG (short-handed goal) is the goal scored while the scoring team is outnumbered by its opponents. The total of a player’s GWGs and SHGs includes all games of the National Hockey League (NHL) during the regular season and the playoffs. The hyphen indicates that this value is unknown.

An international win includes a win at the Olympic Games, the World Championships, the World Cup of Hockey/Canada Cup. The number of games and points per games at these tournaments is given in brackets.